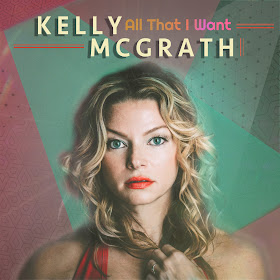 Vocal sensation and powerful songwriter Kelly McGrath has emerged with her latest single “All That I Want”, a stellar follow up to her previous country smash “You and Me Today”. The commercial momentum engendered by the aforementioned track’s success is carried over with this new release – a brightly arranged musical piece striking up considerable tension thanks to its interesting juxtaposing intense lyrics about a fraught interpersonal relationship with exhubrant, powerful backing from some of the best musicians working in the genre today. The production highlights the song’s strengths by imbuing it with muscular flair, but there’s a fundamentally solid piece of songwriting working behind all the modern gloss. McGrath is never anything less than an absolutely convincing singer and the arrangement gives her a massive platform for getting over her story.

There’s little mistaking the arrangement for what it is – five star AOR rock surging with brash authority. Much of its propulsive success can be laid at the feet of powerhouse drumming that, despite its hard hitting contribution, never overplays. Everything is cut close to the bone on this musical performances – these are clearly musicians capable of stepping into the spotlight and showing off their chops, but material like McGrath’s demands a more artful response and their efforts serving the song enhance it. The track is tailored to an ideal length for the song’s subject and form – listeners will never feel like they’ve been cheated. It’s no mere placeholder for McGrath’s vocal.

Her vocal is exceptional enough to dominate the song, but McGrath is smarter than that. She modulates her vocal according to the lyrical demands and the result is an uptempo, but thoughtful singing performance that helps the performance stand out even further. Her lyrics aren’t high flown poetic musings, but she instead shows the clear vision of a storyteller and knows how to entertain her target audience. This isn’t a track, however, with narrow appeal. Kelly McGrath sings the track with such convincing authority it will only increase the chances potential new listeners will relate to her work. Her ascent through the firmament of popular music continues unabated thanks to the high quality driving releases like this. “All That I Want” is sure to entertain and speaks to experiences shared by nearly every adult who has ever felt yearning in their heart. It’s a memorable performance cutting across genre lines and further solidifies McGrath’s standing as one of the best vocalists working today.
Blog Admin at 11:28 AM
Share