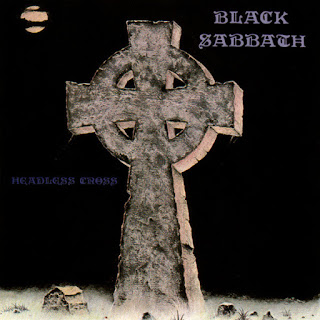 I wrote in an earlier review of my introduction to Black Sabbath via Castle Communication’s Greatest Hits collection. The moment came in 1985, near or soon after my tenth birthday, and the mid-eighties soon proved to be slow going for any young kid latching onto Sabbath as an ongoing enterprise. One of my news “bibles” in those pre-Internet days, Hit Parader, remained the only magazine outlet covering the band on even a semi-regular basis and the coverage, invariably, came across with a discernibly skeptical note. My new favorite band, unfortunately, served up plenty of reasons to doubt their viability. Hit Parader chronicled in painful detail the Glenn Hughes debacle, rallied briefly around the band recruiting promising young singer Ray Gillen, covered his eventual departure and dismissive comments on the band’s future with more than a little glee, and called on guitarist and founder Tony Iommi to disband one of heavy metal’s foundational bands.

I stayed a true believer. By late 1988, I was exchanging a correspondence with original drummer Bill Ward resulting from my teenage hubris. There wasn’t any Black Sabbath biography or much attention, at all really, paid to the band’s pivotal role in shaping much of modern heavy music. I saw myself redressing that imbalance and wrote handwritten letters to each original band member, care of their respective record companies, with my proposal and a few questions to get things started. I was thirteen years old. Bill Ward answered and we began exchanging handwritten letters.

Tony Iommi never answered, but I did receive a letter. It was a mailing from the Black Sabbath Appreciation Society, ran by Pete Sarfas. I read the usual prattle about an expensive (for a thirteen year old) membership, but the letter came with news. Drummer Cozy Powell had joined the band and Sabbath had commenced work on a new studio album with the latest singer of record, Tony Martin. As a young fan of 70’s classic hard rock, I knew Powell from his playing on Rainbow’s second album Rising. It came as eye-popping news.

It meant a new round of fighting as well. By 1989, my friends firmly supported newer metal bands like Metallica, Slayer, Anthrax, et al, and urged me to get with the times. If I had to listen to Sabbath, it needed to be Ozzy or else hit the bricks. For me, the heart of Black Sabbath was never the front man, it was Tony Iommi’s guitar and the vocalist needed to hit certain marks and nothing more. My friends derided Dio and new singer Tony Martin as pseudo-operatic nonsense. I didn’t care. I heard a lot on the post Ozzy albums that came off like pure Sabbath for me.

Headless Cross hit. I remember reading about the release in Parader and then seeing the video on Headbanger’s Ball, MTV’s grudging and often frustrating concession to a movement they scheduled for nowhereville on the weekends. I’m convinced an entire generation of heavy music freaks stayed awake for that MTV dribble because they knew, invariably, a gem would slip through the dreck.

I loved it. The thunderous drums, the video’s evocative yet understated atmospherics, and the Martin’s undeniable vocal power immediately impressed me. There is the big Iommi riff, yes, but we likewise hear Tony reengaging with his soloing with an immediacy more hit and miss on the band’s previous studio release The Eternal Idol. Iommi has credited Powell, in a handful of interviews, for inspiring him during a difficult time in the band’s history and their collaboration brought something of the band’s original musical spirit back, albeit in a modern context. Powell understood how juxtaposing his playing against Iommi’s guitar produced make or break opportunities for the band’s musical style and re-interpreted Bill Ward’s approach to playing with Iommi through his own sensibilities. The solo is one of Tony’s best in quite some time, excepting The Eternal Idol’s “The Shining”, and session bassist Laurence Cottle deserves a special mention in the band’s history for the job he does on the album as a whole, but the title track in particular.

I scooped up a cassette copy days later, if that, and the remainder didn’t disappoint. The album’s second song “Devil and Daughter” is more uptempo fare than the album’s title song and has a discernibly stronger commercial edge than recent Sabbath material at that point. It comes from the palpably brighter bounce Geoff Nicholls’ keyboards and Powell’s drums bring to the material, but the chorus also marks this as something very different from, let’s say, “Symptom of the Universe” or “Slipping Away”. It’s much more in the vein of mid to late eighties’ hard rock/heavy metal, but Iommi remains the clear cut link to the band’s past with another signature incendiary solo.

“When Death Calls”, a later mainstay of the tour’s live set, is one of the finest achievements from this era in the band’s history. It’s cast, superficially, in the same vein of other Sabbath “ballads”, but given a fair darker and heavier tilt than what we’re accustomed to with tracks like otherwise crunching light and shadow classic “Children of the Sea” and “The Sign of the Southern Crosses”. Martin benefits from some atmospheric production in the song’s first half, but takes over in the uptempo coda with real authority and conviction. A rare Sabbath guest spot comes here as Queen’s Brian May delivers a solo late, but ratchets up the intensity with claustrophobic and spot on lead work.

“Kill in the Spirit World” is another track where modern and retro Sabbath meets with frequently satisfying effect. The verses are guided by nice, striding drums and guitar oriented hard rock aspired to circa 1989, but the arrangement mixes in some minor key embellishments recalling the band’s earlier work. The song has an underrated chorus and Martin turns in another in a string of strong vocal performances. “Call of the Wild” isn’t a terrible song, but it’s a tone deaf misstep for this particular band. One of their contemporizes, Deep Purple, included a song with the same title on their 1988 release House of the Blue Light and it still stands as one of the more painfully veteran attempts to find hard rock relevancy in the later 1980’s… because it’s so utterly out of character. This is a song practically announcing how it’s written to formula; it’s a mixed blessing, however, that the song so successfully realizes that formula. The lyrics tackle familiar tropes – but they do with a turn of phrase all their own.

The album’s penultimate tune, “Black Moon”, frequently makes lists of neglected Sabbath classics for good reason. Buried on an unjustly neglected non-Ozzy album, this drum driven barnburner benefits, as well, from some fiery Iommi lead guitar. The production is key to the song’s success, however, thanks to the theatrical setting given to both Powell’s drumming and Martin’s vocal. The finale “Nightwing” is a dramatic curtain closer for the original release. It opens with one of the best Iommi acoustic pieces in his recording career while, predictably, alternating between light and heavy. It’s another of those aforementioned sleeper tunes in the band’s long history and Iommi’s sensitively rendered solo puts an exclamation point on the tune unlike anything else in the band’s discography.

Tony, Geezer, even you Ozzy… I forgive you. I don’t expect you to understand. When Bruce Springsteen inducted Bob Dylan to the Rock and Roll Hall of Fame, he described hearing “Like a Rolling Stone” for the first time. The Boss compared it to someone kicking open a door in his mind. Yes, Dylan eventually affected me in a similar way, a lot of your contemporaries did as well; music has given me much. Before all of that later music though, there was a band who gripped me musically like nothing else and Headless Cross rewarded the faith I placed in them.

Posted by Blog Admin at 1:25 AM No comments: