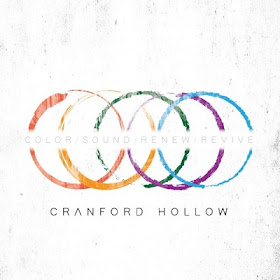 Many bands and artists take pre-plotted paths to success, carefully orchestrated to ensure commercial success, but often relatively bloodless and free of passion. Other artists and bands, however, follow their occasionally wayward muses wherever they may lead and the results are invariably more interesting and rewarding for listeners. Cranford Hollow’s journey from their 2011 formation as a decidedly retro minded outfit has reached a place, five albums later, where labels like “Americana” or “traditional” can scarcely be applied to them.  Instead, they’ve grasped a sound and approach that reaches far beyond those labels to grasp something much different, a creative reach that employs traditional instruments in very modern ways. Their latest release, Color/Sound/Renew/Revive finds this South Carolina based five piece hitting their marks and then some. There’s a vibrant, life-affirming creativity running through the album’s eight songs, even the darkest lyrical moments,  and the band plays together with tremendous chemistry.

The masterful first cut, “Songfield”, begins the album in a measured way.  Cranford Hollow are clearly not a band who rushes things – instead, the intricate weave of electric guitar fills laid over the top of a strong acoustic guitar rhythm track. Lead singer, songwriter, and second guitarist John Cranford’s vocals certainly recall some of his songwriting influences, i.e. Tom Waits, but his songwriting content and phrasing bear the idiosyncratic qualities evident in the greatest individual talents and he shows no hints of hitting a wall in terms of growth. The second song “Long Shadows” has a decidedly more raucous air than the first and is largely propelled by Eric Reid’s darkly lyrical fiddle playing that, despite its intensity, musically sweetens the melancholy sentiments so often conveyed by Cranford’s songwriting. Lead guitarist Yannie Reynecke makes his presence felt with an assortment of hot, blues-drenched licks.

Randy Rockalotta’s drumming opens “Noise” with some exceptionally tricky rhythms and Cranford enters the tracks with a rugged, but wonderfully emotive, vocal. This is one of the more interesting cuts on the album as it lays bare the band’s various traditional influences and recasts them as something that can only be called “art rock” with retro influences. It still sports all of the required grit and gravel and definitely shows off an identity you wouldn’t mistake for anyone else working today. “And You, Brutis” is one of the better examples of lyric writing on the album and the musical arrangement proves equally up to the task of embodying Cranford’s words. It also demonstrates the same penchant for surprising listeners thanks to its unusual rhythms. Reynecke has the six string chops to dominate any performance, but his remarkable inclination towards color and restraint can be heard on “North”. This is a player who prefers a compositional style better suited to serving the song and his interplay with Cranford’s second guitar is impossible to deny. The album’s closer “Swing” has a brighter hue than many of the album’s earlier tracks, thanks in no small part to the nicely structured harmony vocals and the strong melodic powers carrying it along. Color/Sound/Renew/Revive succeeds  in a way few acts of this ilk can match.