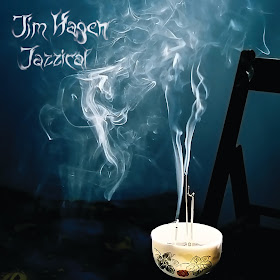 Jazz guitarist Jim Hagen has established a much deserved reputation as one of the best musicians working in the genre today. Many might dub his particular brand of jazz as “smooth” and it isn’t off the mark in terms of texture, but it doesn’t begin to describe the extent of his skills. Hagen’s original work and covers draws deeply from one of America’s finest musical traditions and his use of its lexicon shows a wide command over its intricacies along with an individual style quite unlike anyone else working in a similar vein. The nine songs on his latest album Jazzical testify to the aforementioned words and reveal him to be a formidable talent still growing despite a lifetime in the music world. Few artists can attest to such a characteristic.

The first song and lead-off single, “Pismo Beach”, immediately draws listeners into his web. Hagen’s guitar work is, naturally, the musical center of these nine pieces, but that never means other instruments fail to provide an equal and colorful contribution. Hagen is clearly a musician with an ensemble, rather than virtuoso, approach and the drumming and keyboards enrich everything he does. Melody is not in short supply – each of the instrumentalists are fully cognizant of their role in this mix. “D-Tuna” has a less direct approach and opens with an artful cluster of sound before the arrangement solidifies into a discernible structure. Once again, however, melody is the order of the day and this has a bright, optimistic air without ever attempting to overwhelm listeners. The keyboard work is an especially important component of its success. Listeners return to the full on sound of “smooth” jazz with the song “Alexandra”, but there’s a slightly melancholy or elegiac air surrounding this song that Hagen and his collaborators play with just the right amount of energy. The recording emphasizes the song’s evocative elements quite nicely.

The bass opening “All Blues” sets a nice, loping stage for the arrangement and Hagen;s guitar does a memorable job of dueling with the keyboards while bobbing in and out of the mix. Each of the nine songs on this release do a superb job of remaining focused throughout and never risking self-indulgence. Few songs illustrate this better than the title track. Despite running nearly seven minutes long, “Jazzical” has a melodic motif that’s difficult to ignore or forget. The fluid transitions and various textural changes are, likewise, expertly handled. Hagen’s warm guitar sound has a syrupy musicality that’s equally difficult to forget. The album’s penultimate track, “Piece of Cake”, exudes a playful side quite unlike anything else on the release and the drumming complements it very well. The finale, “Lazy Sunday”, features some of his best guitar work and closes Jazzical on an appropriately tasteful note while displaying the same talents that make the preceding eight songs so delectable. Jim Hagen and his cohorts might be working with a long established form, but they prove skillful at pouring old wine into new bottles.