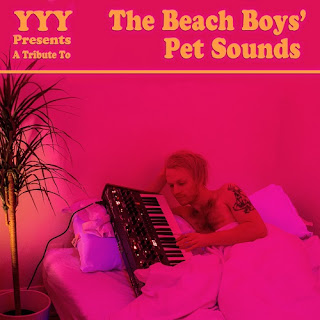 Pet Sounds is one of those albums. There are classics and then there are albums occupying a place in the art’s pantheon akin to the Presidential faces chiseled out of rock on the side of America’s Mount Rushmore. Their positions are unassailable by fickle fluctuations in public taste or the vagaries of history. The Beach Boys’ seminal 1960’s release Pet Sounds remains the yardstick, in many respects, of pop songwriting and harmony vocals at its finest and still ambitious fifty years on since its recording. The clarion call to re-imagine this work for a young, confident musician and performer is undoubtedly alluring. Minneapolis’ Austin Carson’s loving and ambitious stab at recreating the album for a modern audience, A Tribute to The Beach Boys’ Pet Sounds, is a talent laden affair sporting a cast of characters culled from the Minneapolis music scene and Carson’s own enormous talents, working here under the moniker YYY, that comes together quite successfully.

It’s easy to take albums like Pet Sounds for granted because its such an ingrained part of our musical lexicon with its influence touching many styles and genres. YYY, clearly, has never taken the album for granted and its evident from his recording of “Wouldn’t It Be Nice?” alone. He peels away a lot of the production layers listeners will be familiar with in the original while matching much of the same vocal excellence. His leaner, more modern reshaping of the song won’t be a jarring experience for new and older fans alike. The rich vocals on “You Still Believe In Me”, featuring City Counselor, makes for one of the more satisfying musical experiences on this tribute coupled with YYY’s outstanding rethink of the arrangement. Electronic instruments are definitely dominant in his musical vision, but countless tracks on the album prove he’s far from exclusively reliant on them for a song’s success or failure. There’s a much more pronounced modern approach evident on the track “I’m Waiting for the Day” that’s likely the result of YYY using guest stars LOTT and Zinnia to maximum advantage. It’s a good judgment call to make.

“Sloop John B” cops much of the original’s sensitive edge while framing it in a different musical context and proves to be one of YYY’s best adaptations of the source stuff. Lydia Liza and Cool Moon are excellent additions to the passionate and sometimes chaotic performance of “Hang On to Your Ego” while Devata Daun and C.Kostra are welcome forces working to make the late album performance of “I Just Wasn’t Made for These Times” all the more meaningful. The big closing number is certainly another mountain for YYY to scale – there’s arguably no song on Pet Sounds more popularized and highly regarded than “Good Vibrations” and there’s a certain amount of careful attentiveness in YYY’s performance that suggests he hears it the same way. Al Church’s guitar contributions are especially pivotal here. YYY has done much more than recorded a first class tribute album – he’s released something that could be referred to further illustrate the excellence of Pet Sounds while revealing him to be a mammoth talent of his own who is clearly destined for great things.
Posted by Blog Admin at 2:28 AM