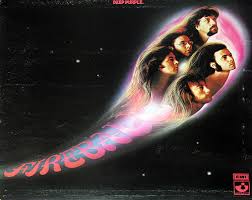 Band as well oiled beast best describes Fireball era Deep Purple. The breakthrough success of In Rock emboldened the band, individually and collectively, with a confidence level heretofore unknown. We must remember the path to continued success is assured for them at this point – road rot hasn’t quite set in yet and maintaining momentum requires them to reproduce In Rock, frankly not a tall order for this lineup at its peak power, and nothing more. There’s swagger galore permeating this release and a practically gleeful inclination towards upending listener’s expectations.

The album opens with a bracing salvo reminiscent of In Rock’s power. Title songs are usually tucked mid way through an album’s track listing and reserved for numbers in some way representative of the band. It became a staple of the live set and returned to prominence following Blackmore’s 1993 departure from the band. Ian Paice’s drums are propulsive and swing in a way few of his contemporaries ever matched – when intelligent and well intentioned music devotees want to slather John Bonham’s memory in laurel leaves and anoint him King of Rock Drummers, they’re counseled to remember Paice’s contributions before declaring the matter settled.

“No No No” is what happens when Ritchie Blackmore listens to Shuggie Otis. We get some lyrics of the era decrying the tyranny of the Man’s hold over the outsider, but Gillan gives the song stakes it wouldn’t otherwise have with a lung-busting vocal. Paice and bassist Roger Glover ride a potent groove for Blackmore’s fiery licks to fill in. We’re back in solidly rock territory for “Demon’s Eye” and Gillan distinguishes relatively pedestrian lyrics with a vocal fully dramatizing their possibilities, Blackmore’s lead guitar is especially biting and well tailored with this cut.

“Anyone’s Daughter” dizzies casual listeners. We go from the muscular rock posturing of “Demon’s Eye” into the shaggy dog country blues of this song with nary a blink and Gillan’s vocal plays it coolly straight-faced despite the lyric’s potential for mucking things up. He shows an expert stand up comic’s instinct for playing a joke with just the right amount of deadpan and it makes this all the more enjoyable. “The Mule” is largely an Ian Paice drumming showcase, but there’s some wicked good Blackmore guitar and contributions from Jon Lord woven into the song’s fabric. Gillan’s brief vocal signals a turning point of sorts in the song, but nonetheless hits its intended mark.

“Fools” is my favorite Deep Purple song. The patient build, orchestrated in just the right way, breaks out into the sound of Purple n full swing quite unlike anything else in the band’s catalog. The album vocal isn’t even the best – the set Listen, Learn, Read On included a scat vocal, lyric not quite fleshed in, which ranks in my mind as one of the best rock vocals ever, from anyone. He brings some of that same fearlessness to this performance and it makes for one of the band’s greatest moments. Blackmore’s guitar during the song’s second half is among his finest recorded moments.

Roger Glover’s insistent bass pulse begins “No One Came”, Ian Gillan’s deliciously cynical spiel about the perils of pursuing rock and roll success and the inevitable crew of leeches glomming on. It’s another cut where Gillan’s charisma carries the day every bit as much as his lung power and Blackmore responds with a scorching old school rock and roll guitar part ratcheting up its temperature. In Rock is the template realized, Machine Head is the formula refined. Fireball, however, is the DNA of Deep Purple, laid out regardless of other considerations, and charged with once in a lifetime confidence.
Posted by Blog Admin at 1:45 AM