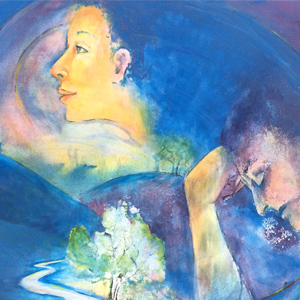 Science NV has always stood out as a feast for devoted progressive rock fans. Their latest release, a two volume set entitled The Quest for Prester John, reaffirms their status as one of the more forward thinking practitioners of the style working today and expands their conceptual and musical ambitions in a breathtaking way. Despite the scientific backgrounds of the band’s four members, Science NV’s writing and performances invoke the best of progressive music insofar as they are challenging yet accessible, intelligent yet relatable, and brimming with the same passion heard with the genre’s iconic acts. They’ve hit quite a creative stride with this fourth album and its wide canvas indicates their growing confidence as composers and an unit.

Volume One opens with the guitar and synthesizer driven theatrics of “Fanfare”, an instrumental introduction for the collection. The first conventional song on The Quest for Prester John, “Eloise’s Tale”, is a nine movement epic running over thirty two minutes, featuring two singers, and exploring a variety of musical textures. “What Is a Word” opens the song on a distinctly folky note before segueing into the very Yes influenced workout “Overland”. The song neatly bookends with its concluding movement, “Slowly”, albeit in a more rock influenced fashion than we heard in the track’s opening movement. It’s a fully realized effort rather than a tacked together affair; vocals melodies often upend expectations and seamlessly mesh with arrangements seldom standing pat and packed with surprise,

“An Earthly Paradise” has the unenviable task of following the aforementioned epic but it works the only way it can. Rather than taking another, smaller stab at the sort of grandeur they aimed for with “Eloise’s Tale”, Science NV strips “An Earthly Paradise” down to stark beauty instead. The fragmented, yet deceptively lyrical, piano playing has just enough gossamer synthesizer accompaniment to help this instrumental coalesce into an evocative, dramatic musical piece. The synthesizer salvos opening and recurring throughout “The Gates of Alexander” are definitely reminiscent of trumpet blasts; Rich Kallet’s drumming energetically embodies the onrush of countless horses charging through the aforementioned gates and the lead guitar playing has some remarkably straight forward rock music flair.

“Above the Hills” returns listeners to the softer, folk/progressive textures we heard with the early sections of “Eloise’s Tale”. The lyrics offer up some of The Quest for Prester John’s best storytelling and the vocals pay close attention to hitting the right phrasing, but it’s the confluence of these elements making “Above the Hills” one of the sharpest tracks emerging from this release. There’s definitely a note of grandeur struck with Part One’s final song “The Mongols” and some hard hitting rock influences percolating to the surface of the band’s musical attack. It’s a fiery instrumental interspersed with some brief, dreamier passages that contrast well. If it’s intended to act a sort of musical “hinge” swinging listeners into the project’s second part, it’s quite effective. Science NV’s The Quest for Prester John is the concept album on a larger scale than we’ve heard in some time.