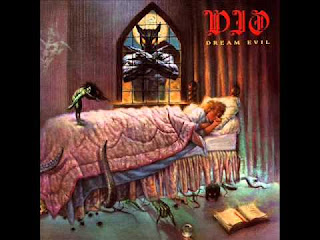 Ronnie James Dio’s 1987 album Dream Evil stands as a demarcation point of sorts for anyone interested in the legendary singer/songwriter’s career. His first solo release without guitarist Vivian Campbell features Craig Goldy’s first stint as Dio’s guitar player surrounded by the remnants of Dio Mark I – drummer Vinny Appice, keyboardist Claude Schnell, and bassist Jimmy Bain. Dio’s waning commercial peak took a hit with this relatively middle of the road album – he needed a firm hit to reconsolidate his appeal in the late 80’s and with Campbell’s departure, but Dream Evil ultimately produced middling returns and led Dio to configure his lineup yet again before 1990’s Lock Up the Wolves.

“Night People” teeters between predictability and something truly distinctive thanks to Dio’s contributions or would otherwise sound solidly pedestrian. It’s competent enough; no one can ever claim there’s a lack of polish in this performance, but genuine inspiration is scarce. The title song is a conscious attempt at another “Holy Diver” like moment. It fails, however, because there’s no real spark – instead of having a melody listeners can sink their teeth into, everything is built around the chorus payoff which is really nothing else but synthesizer flourishes amplifying the moment. “Sunset Superman” is one of the album’s more effective songs because it foregoes any sort of frills in favor of marching straight ahead and as an unambiguous hard rock track. Goldy excels here playing the song’s compact, tightly wound riff with crisp aggression.

Songs like “All the Fools Sailed Away” became mainstays on Dio’s solo releases for some time – pseudo poetic missives anchored by broad stroked depictions of unity and a faux profound chorus. This is one of the more hamfisted examples but achieves, to its credit, an impressive theatrical effect despite itself and the obviously tacked on instrumental breaks are, nonetheless, memorable. “Overlove” is a stripped back bruiser, much like the earlier “Sunset Superman”, and another underrated gem from Dream Evil. Goldy really works best on these straight forward rockers. The single “I Could Have Been a Dreamer” generated next to no attention for the album on release and it’s easy to hear why; much like the earlier title track, there is no real melody to speak of, only a keyboard laden chorus.

“Faces in the Window” has some unexpected vocal elements, but the arrangement has a largely rote feel oddly distinguished, however, by one of Goldy’s finest solos on the album. The release closes with the swinging drums behind “When a Woman Cries”. Keyboards exert a much stronger presence in this song than earlier tracks and we’re snapped out of the moment by the awkward presentation of the chorus on a couple occasions/ It’s a fine track, one of the album’s more interesting moments, but not entirely successful. Dream Evil definitely has historical significance over Dio’s solo career, in hindsight, it is a solid though unremarkable transitional release.
Posted by Blog Admin at 8:32 PM