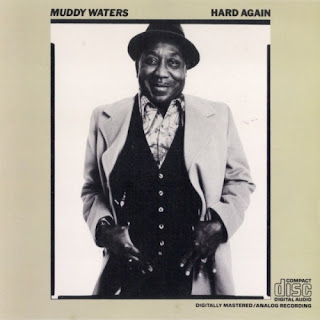 There’s a strong case to be made that the most significant moment of Johnny Winter’s career didn’t come with his epic sophomore album Second Winter or later achievements like Still Alive and Well; some voices, instead, argue Winter’s contributions as bandleader and producer of Muddy Waters’ 1977 Hard Again marked a seminal moment when the Texan born slide guitar master reached his full maturity as a bluesman. Hardcore devotees of the form definitely owe him a debt of gratitude. He steered the iconic Waters back to first principles, prodding him to play guitar again rather than relying on his voice, and invested each of the aforementioned nine cuts with a bracing live attack engaging listeners from the first. Muddy is accompanied by some longtime collaborators and a virtual All-Star lineup – pianist “Pinetop” Perkins, drummer Willie “Big Eyes” Smith, and harmonica master James Cotton play at an inspired level throughout the entirety of Hard Again.  Few albums truly deserve the label “classic”, but this is one of them.

Thank you Tom Roznowski. The former host of Power/Rock 92.3 FM Bloomington’s Blues Sunday played the album opener “Mannish Boy” at the end of a long bygone day of rest and changed my life forever. I groped in a pile of blank cassettes and stuffed one inside my tape deck in a rushed attempt to capture the track and snagged a near complete version I played to death in the following years. Willie Smith lays down a groove so deep in the pocket that it practically sounds subterranean. Winter, second guitarist Bob Margolin, and Waters whip up a near lascivious version of this timeless Chicago blues classic. Winter places Waters’ voice front and center and the Delta born singer responds with a vocal for the ages. Another gritty original, “Bus Driver”, has an understated lascivious turn as well with its chorus and the molasses deep crawl gives Waters an ideal platform for unleashing his voice in full. It’s an invigorating listen.

“Jealous Hearted Man” is another peak on the recording. The churning arrangement draws out a percussive minded Waters, his vocal resonating with heartache and humor alike, and Willie “Big Eyes” Smith once again stands out thanks to his work on the kit. It’s simple and straight forward, but swings in a propulsive way few drummers can match. “I Can’t Be Satisfied” drops the electrified trappings for a few in favor of acoustic instrumentation, particularly slide guitar, and draws listener’s attention to the immense gravitas behind Muddy’s voice. This album is, hands down, one of the nation’s premier vocalists recapturing his peak powers for a final time, and providing a Master’s class on how to inhabit the blues without even a hint of self-consciousness. The best songs on Hard Again roll out of Muddy as naturally as breathing.

The popular and rollicking “The Blues Had a Baby and They Named It Rock and Roll #2”” boasts one of Muddy’s most confident, yet relaxed, vocal performances on the album. It famously hangs on the payoff line in each chorus and Muddy manages to give it a slightly different, ever charismatic spin, on each pass while he pumps the verses up with a consistent bravado that never tires listeners. “Crosseyed Cat” has another churning arrangement, albeit laid out very differently than the earlier “Jealous Hearted Man”, and James Cotton’s harmonica gives it a romping character it might have otherwise lacked. Smith lays some well timed fills into the performance that helps accentuate its steady rolling pulse while orchestrating the dynamic shifts from one passage into the next. The instrumental intensity only continues to build and the guitar breaks near the song’s end are especially tasty.

The slow drag of the album’s finale, “Little Girl”, neatly bookends the opener while copping a more muted feel. There’s none of the boasting we hear in “Mannish Boy”, but there’s definitely an edge of suggestiveness in the lyrics Muddy plays with just the right amount of attitude. He indulges some familiar “calling out” for Winter’s guitar and the Texan great responds with spot on blues guitar that acts as Muddy’s instrumental counterpoint rather than seizing glory for itself alone. It’s one of Winter’s finest hours as a guitarist and we can definitely credit him with leading the great Muddy Waters out of a wilderness of increasingly lackluster all-star affairs and ill advised attempts to appeal to modern listeners. Winter gets Muddy doing what he does best on Hard Again and what we’re left with is an enduring monument to one of America’s true musical giants.
Posted by Blog Admin at 12:17 AM