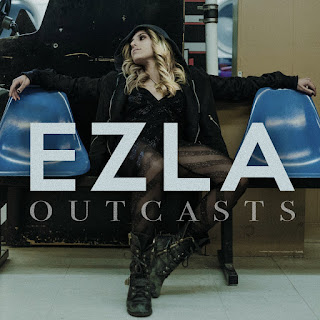 Nashville has long since ceased being exclusively the realm of cowboy hat wearing would be hayseeds peddling a particular vision of life, love, and all that to the music buying public. It has continued, as cultural winds shift, to be a major hub for popular music in America and many young performers continue to flock to its environs with the hopes that talent will out and they’ll get their day in the sun. EZLA’s EP Outcasts is a five song release revealing this young female singer/songwriter to be one of her generation’s more formidable talents in the making. Her musical imagination has stoked enough of a sympathetic response from her target audience that she’s garnered over thirty five thousands streams of her material on the Spotify platform. Even a single turn through the tracks gives strong indication way. EZLA merges dark lyrical impulses with equally atmospheric musical structures and all of it defined by a well developed sense of melodic possibility.

There’s an initial cloud of shimmering synths coming with the opening song, “Outcasts”, but it shifts nearly immediately into much more looming, moodier fare. EZLA certainly has an excellent voice technically, but the sound is all her own. It has a cawing, slightly nasal quality possibly a little unsettling initially, but listeners will soon settle in with her style. The title cut takes a handful of relatively unexpected turns during its duration and the idiosyncratic tone of her voice commands a definite presence from the first. There’s more of a conventional use of melody with the song “Skeletons”, but EZLA’s musical imagination can’t help but skew our expectations some with this song as well. Her sharp, intelligent phrasing lighting up the lyrics of the opener is equally powerful here.

The heated longing at the center of “Satellites” exerts a definite amount of commercial appeal, but it likewise displays some of the same artier inclinations that distinguish the first two songs. It could have served as a strong first single for the EP as well, though the title song has a good case for that spot. The dark throb opening “Hangman” quickly dissipates into a mid-tempo pulse with enough nimbleness to switch gears as EZLA’s inventive vocal melody demands. The intense musical thrust of the song never relents despite any tempo shifts and the song concludes on a distinctly chaotic, yet controlled, note. There’s a theatrical air surrounding a lot of EZLA’s material and that reaches its apex with Outcasts’ finale “Psycho Killers”. This is another sleek electronic driven number with occasional spikes of electric guitar cutting its way out of the mix. Her hushed, understated vocal has some post production effects applied to it at various points, but those alterations never undercut the natural power of her voice. It makes for an effective ending to the EP providing it with another colorful moment nonetheless consistent with the release as a whole. Outcasts is an ear-catching debut from a vocalist, writer, and performer who truly stands apart.
Posted by Blog Admin at 11:51 PM